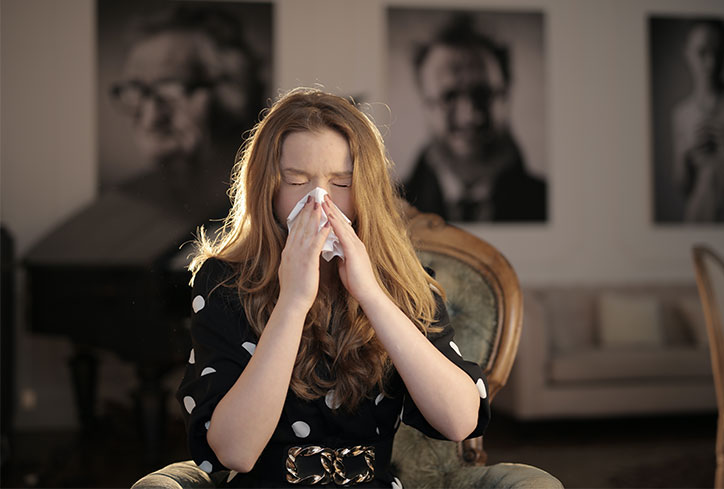 Does your heart stop when you sneeze?

Sneezing is a reflex that we all know, which is normal but can be a sign of various illnesses. It is the expulsion of air from the lungs through the nose and mouth, most often in response to irritation of the nasal mucosa.

This is a defense reflex: it allows particles, irritants or microbes that could cause infection to be expelled from the nose.

As common as it is, little is still known about sneezing. It has been little studied and its mechanisms are not fully understood.

Does your heart stop when you sneeze?

Does your heart stop when you sneeze?When we sneeze, we feel as if our heart has stopped beating, but it doesn’t.

Heartbeat is simply the beating of the heart, which is the contraction of the heart muscle during blood circulation.

When a person sneezes, the heartbeat will not stop, but because a large amount of pressure accumulates in the chest before sneezing, these pressures will be released quickly when sneezing, so the blood flowing back to the heart can be reduced in an instant.

It affects the contraction of the myocardium very briefly, giving the illusion that the heartbeat has stopped.

Finally, it should be added that in reality, when we sneeze, we don’t notice the change in heartbeat, because the action of sneezing almost mobilizes all our attention.

Sneezing most often occurs in response to irritation of the nasal mucosa, caused by the presence of dust, for example.

It can also be triggered, in some people, by exposure to sunlight or bright light: this is the photo-sternutatory reflex. This would concern about a quarter of the population.

Other situations can trigger a sneeze or the urge to sneeze, depending on the person, such as having a full stomach, eating certain foods, having an orgasm, etc.

Allergies, and therefore exposure to allergens, are known to trigger bursts of sneezing, in addition to other rhinitis or watery eyes symptoms. Allergens make the nasal mucosa hypersensitive, and therefore easily irritable.

Finally, pathologies such as epilepsy or a lesion of the postero-inferior cerebellar artery can sometimes lead to unwanted sneezing.

What happens if you sneeze?

The mechanisms are not fully understood, but it is known that the nasal mucosa, when irritated, relays information to the trigeminal nerve, which activates the trigeminal nucleus in the brain. It is this center that “commands” the sneezing of the muscles of the diaphragm, among others. It is therefore a nervous reflex.

This reflex involves an inspiration phase followed by an expiration phase, during which the air is expelled at a speed of about 150 km / h. The palate and the glottis direct the air towards the nose, to ensure its “cleaning“. A single sneeze would expel 100,000 viruses and bacteria from the nose.

Chronic sinusitis is a very debilitating pathology. Characterized by inflammation of the sinuses for more than twelve weeks, it causes great fatigue and can lead to depression.

Current treatments include anti-inflammatories and antibiotics. Researchers at the University of San Francisco are counting on another therapeutic strategy.

Instead of targeting and eliminating the bacteria causing the infection, they plan to intervene on the nasal flora of people with chronic sinusitis by introducing good bacteria.

Indeed, thanks to new DNA analysis techniques, they discovered in abundance, on the nasal walls of healthy people, bacteria producing lactic acid (Lactobacillus sakei). Conversely, the bacterial nasal flora of all people with chronic sinusitis has been found to be very poor.

Lactobacilli are almost non-existent there. On the other hand, a bacterium belonging to the genus Corynebacterium is largely dominant. The latter, perhaps at the origin of sinusitis according to the researchers, is hardly found in the nose of healthy people because it is inhibited by lactobacilli …

The manipulation of microbial communities constitutes a serious therapeutic avenue for another organ key to humans: the gut.

Sneezing occurs when the purification system begins to malfunction. The researchers discovered it by growing hair cells taken from the noses of mice and humans in the lab. “The operation is not painful and the culture is easy“, specifies Christelle Coraux, specialist in respiratory epithelium at Inserm (Reims).

By subjecting these cells to the same pressure conditions as those caused during a sneeze (energy and duration), they observed an increase in the frequency of the beats.

The latter is activated by the production of several specific molecules that American researchers have found in high concentrations in people who have just sneezed.

Finally, if some people sneeze often, it is because their sneezing is not effective. “Putting drops of these molecules in the nose could constitute a therapeutic avenue“, conclude Noam Cohen and his team. “Allergic sneezing is another process,” says Christelle Coraux. And for heavier pathologies, the track of epithelial stem cells is the most serious ”.

9 things you didn’t know about sneezing

If the flu season is gradually fading, the allergy season is making a comeback with all the inconvenience that this implies. Sneezing is a reflex.

Some people sneeze harder than others, but we all do it in the end. Here are some fun facts about sneezing – neither pepper!

At least, according to some sources . The brave Myth-busters calculated that their sneezes went at a speed of more than 55 kilometers.

Remember to put your hand in front of your mouth, since your sneezing germs can spread up to 1.5 meters or even up to 9 meters . No way out …

3. We sneeze to “restart” our body

In 2012, researchers found THE reason our bodies make us sneeze . The results were then published in the ScienceDaily:

Just like an overheating computer, our nose asks for a “restart” when it is too stressed and this biological reaction then causes the pressure that makes you sneeze.

A good sneeze helps to restore the nasal environment to new to capture the “bad” particles. Biochemical signals cause the movements of small hairs in our nasal cavities.

4. Daylight can make us sneeze

Feathers, pepper, colds, flu, and allergies aren’t the only reasons you sneeze. About one in four people sneeze in daylight, a photo-sneezing reflex according to Live Science.

Scientists still disagree on this question, but the brain receives almost the same message for reducing pupil size and for sneezing.

5. It is normal to sneeze two or three times

These “bad particles” that we were talking about before sometimes have trouble making their way to the exit. So it takes more than once before these irritants come out, reports Everyday Health .

6. You will close your eyes involuntarily

There isn’t much you can do. Closing your eyes when you sneeze is a reflex, as is the blow to the knee that makes the leg lift.

7. Your heart doesn’t stop when you sneeze

Despite the urban legend, which says that your heart stops when you sneeze, your beats slow down a little bit. We owe this to the deep breaths we take before shouting “achoo”!

8. Better outside than inside

Avoid holding back your sneezes as much as possible. Even if this happens only very rarely, such a restraint could cause serious internal injuries – blood vessels bursting in the eyes or weakened near the brain, perforated eardrums, problems with the diaphragm … If a sneeze is triggered, let yourself go!

9. You can prevent yourself from sneezing

If your nose starts to itch, try rubbing it, sticking your upper lip to your nose, or taking a deep breath.