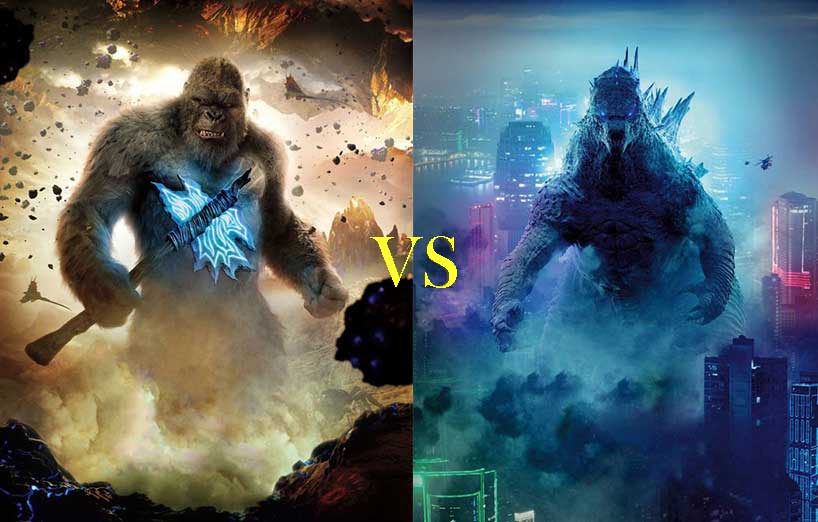 Godzilla vs. Kong released on 31 March 2021. You all must have seen the Godzilla vs Kong movie. What a great movie it was. Video graphics, animation, action, fights were all excellent.

As a reminder, this explosive crossover is directed by Adam Wingard , who offers the first meeting between King Kong and Godzilla since 1962 .

After Godzilla, Godzilla 2 and Kong: Skull Island , Warner embarks on this titanic clash that promises to be stunning. Casting side, the film brings together Alexander Skarsgard , Millie Bobby Brown , Rebecca Hall and Kyle Chandler .Godzilla vs Kong is released in 31 March 2021.

This movie has just touched the hearts of crores of people today. So today we will talk about the fights between Godzilla and Kong. who wins in Godzilla vs. Kong fights? who has the most strength and powerful?

The story takes place three years after the last notable appearance of Godzilla. This time around, the creature arouses attention by behaving in unusual ways, attacking a science base in Florida for no apparent reason.

Kong, who was last seen after the Vietnam War in the 1970s, has reached his adult height. It has never been so imposing, measuring 300 ft (almost 100 m) high. It is cramped in the biodome designed to protect it and keep it under close surveillance.

Despite his stature, Kong is largely at a disadvantage, especially when, on his way to Antarctica, he has to fight the giant reptile in the open sea.

The young girl jia would therefore have met King Kong on Skull Island. However, the most likely reason for their connection is also that they are both orphans .

As a reminder, in Kong: Skull Island,we learned that the Skull crawlers had killed the parents of the giant gorilla, threatening the latter’s species with extinction.

If the circumstances of his meeting with Jia remain to be discovered, these two characters could therefore be linked through their respective grief caused by the loss of their loved ones.

A spring that should ultimately bring emotion to this breathtaking blockbuster and represent a definite advantage for King Kong against Godzilla … Unless the real antagonist of the film is the famous robotic version of the giant lizard .

Who Wins in Godzilla VS. Kong?

We have seen in the movie that the Kong was kept in a safe container, where there is no danger for Kong. And there a girl named Jia, who talks to Kong and also understands Kong’s feelings. Then later they think of taking Kong to another safe place. Kong is a powerful monster of about 300 ft high.

Godzilla and Kong come face to face for the first time when Kong is being taken from the sea by ship. Kong and Godzilla consider each other their enemies. The team and Kong are alerted as Godzilla arrives.

Then Godzilla attacks Kong. But it’s not just about strength here. Because in water Kong can not use his advantages. So first let’s know what are the advantages of Godzilla?

So in comparison to Godzilla and Kong before, Godzilla turns out to be more powerful. Because the first fight is in water and Godzilla has more advantages than Kong in water. Then the second fight is shown to us in the last of the movie.

But here I tell one thing about Godzilla vs Kong fight that Kong was more injured than Godzilla. So now it is difficult for me to say who is the winner.

you can watch Godzilla vs kong full movie online by clicking this button.