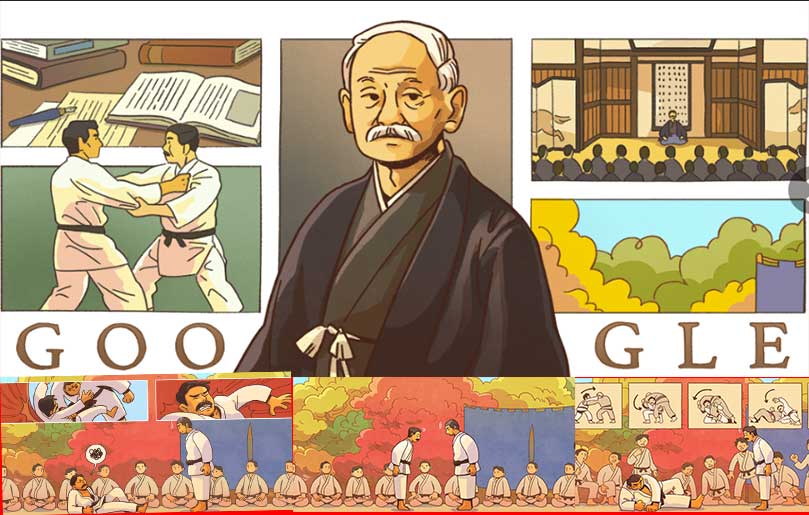 Kano Jigoro (Kanō Jigorō, born 10 December, 1860 in Mikage (Japan), died May 4, 1938) is the founder of Judo Kodokan. He was born into a family of five children (three brothers and two sisters).

He is the third son of Jirosaku Mareshiba Kano, a sake brewer. He married Sumako Takezoe, daughter of Seisi Takezoe who was Japanese Ambassador to Korea. Kano Jigoro had 9 children, 6 girls and 3 boys.

How did Kano Jigoro become the founder of Judo?

At 9 years old, he lost his mother. His father was then appointed to Tokyo. College then brilliant student, he took a keen interest in Western culture. Jigoro Kano arrives in Tokyo in 1871 where he will follow brilliant studies at the faculty of political science and letters.

Not being endowed by nature with an impressive musculature, he began by trying his hand at athletics, tennis, baseball, but he did not find what he was looking for.

He then learned some rudiments of ju-jitsu, from Master Iso, to resist the bullying of his comrades physically stronger than him. Very applied, persevering and concerned with techniques.

Kano Jigoro quickly mastered several styles of ju-jitsu (including Kito-Ryu and Tenjin-shinyo Ryu) that he began to study in 1877, under the tutelage of three successive masters: Hachinosuke Fukuda , Masamoto Iso and Tsunetoshi Iikubo.

It was in 1882 that he founded the Kodokan, Center for the study of the Way based on the principles of modern sports in the Eishoji temple in Tokyo. Kano wants to adapt Ju-jitsu to the new era. Ju-jitsu is an unarmed combat technique used by samurai on the battlefield.

Its only vocation is to put, quickly and well, an attacker out of harm’s way. Kano Jigoro seeks to transform it into a means of educating the body & mind “suitable for the education of an entire nation”.

Kano Jigoro renames his discipline from Ju-Jutsu (art of flexibility/technique) to Ju-do (Path of flexibility), & thus founded what is probably the first modern Budo. The term of ‘flexibility’ is to be taken in the sense of the ‘adaptation’ or ‘non-resistance’.

Other masters will follow his example, transforming their art from “technique” to “Way”.He died in 1938 of pneumonia. He was then 77 years old, and Judo already had more than 100,000 black belts.