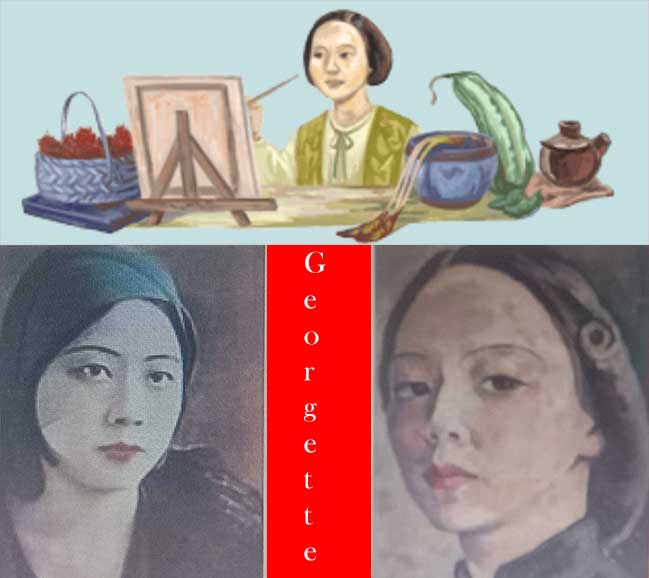 Georgette Chen was born in 1906 in Zhejiang province in China and is the fourth daughter of 12 children. While his family lives in the West, parents force their children to maintain their Mandarin and travel frequently to China.

With an interest in painting since her childhood, the artist will study art at the Art Students League of New York for a year in 1926. Then in 1927, she decided to immigrate to Paris and study at the Académie Colarossi and the Académie Biloul.

In 3 years, Georgette chen saw her works selected to be exhibited at the annual Salon d’Automne. Much of Chen’s life was marked by local and global conflicts, including the Chinese revolutions of 1911 and 1949, as well as World War I and II.

Throughout these upheavals, she has strived to remain devoted to her profession as an artist. In the postwar years, Chen moved to Malaysia, then to Singapore in 1953, where she made a name for herself and where she lived as a painter and teacher. In 1954, she also became a part-time professor at the Nanyang Academy of Fine Arts, where she worked until 1980.

in 1951 Beginning, Georgette’s paintings changed to combine her Western training with the Asian themes, which placed her as a “Nanyang style” artist. Georgette Chen is considered an exceptional figure in Asian art, but also as an independent and willful woman who has forged a unique identity in the world of twentieth century art dominated by men. She died in 1993.

Georgette Chen Li Ying (1906-1993) is a major figure in 20th century Asian art. His paintings belong to the Chinese Nanyang movement which is characterized by a representation of Asian motifs according to Western artistic techniques.

The profession of Georgette Chen’s father – a wealthy Asian art and antiques dealer – allowed her during her childhood to travel notably to China, France and the United States. She then studied art in New York (Art Students League), in Paris (Académie Colarossi, Académie Biloul) and in Shanghai.

Her paintings are therefore inspired by her various experiences and learning, she is especially recognized for her portraits, still lifes and landscapes which have contributed to the international influence of Asian and Singaporean art.

Georgette Chen is part of the Impressionist lineage, and is strongly inspired by an artist such as Claude Monet. She thus seeks to capture light and color. Chen has developed relationships with artistic societies and institutions such as the Angkatan Pelukis Aneka Daya (APAD) and the Singapore Art Society.

While his early works, such as Côte de Bretagne (1930) and Paysage (1930-33), were done in a style similar to the schools of realistic and Barbizon art, many of his later works created in the latter part of his lives were influenced by Post-Impressionists and Beasts of the late 19th and early 20th centuries such as Maurice Utrillo, Paul Cézanne and Vincent Van Gogh.