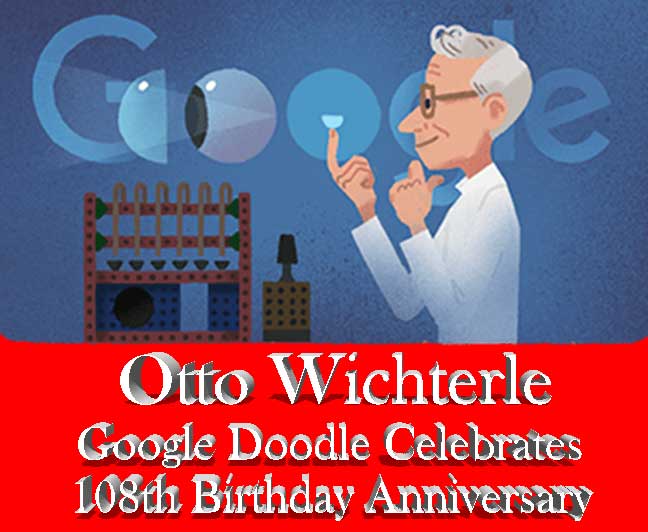 Otto Wichterle was a world famous inventor & Czech scientist, working mainly in the field of macromolecular organic chemistry as one of the founders of this field.

Otto Wichterle is particularly famous for his unique discoveries and inventions which led to substantial improvements & the spread of soft contact lenses around the whole world. These results were based on his original research work on hydrogels.

At the end of 1961, in his apartment, he managed to prove that high-quality soft contact lenses can be made at minimal cost by the method of monomeric centrifugal casting in rotating shapes. The initial device is for the production of contact lenses is well known: it is a device that made up for children – Merkur construction set, with a bicycle dynamo as the motor & later with the motor of a turntable.

At the end of his secondary studies, he left Prostejov to join the chemistry faculty of the Technical University of Prague. Graduated in 1936, Otto Wichterle decided to remain in the academic sphere, devoting himself to scientific research.

Member of the Research Institute of Works, he works particularly on plastics and their multiple possible uses. It was in this context in particular that in 1941 he succeeded in developing the sylon, a technique making it possible to launch and rewind polyamide.

A few years after the invention by the Americans of a similar technology, better known as the name of nylon. briefly imprisoned by the Gestapo , before returning to his post at the University of Prague.

It was finally after the war that Otto Wichterle began to work on ophthalmology, particularly interested in hydrogels placed on contact lenses .

Invented in 1888, lenses were until then relatively stiff and uncomfortable on the eyes. With his teams, Otto Wichterle then invented Hema, a compound inspired by his previous research on polyamide and which serves as the basis for new soft lenses.

There remains one last problem: the edge of its new generation lenses is irregular and does not hold well. Otto Wichterle had to wait until December 1961 to find the solution: by observing the centrifugal force exerted by his spoon in a cup of coffee, he decided to apply the same system to his hydrogel and finally managed to give the right shape to his lenses.

Immediately, Otto Wichterle filed for a patent. Alas, his invention is forcibly taken by the communist power, in place since the end of the Second World War , which immediately sells it abroad for the equivalent of 500,000 dollars.

Otto Wichterle died many years later due to stroke, in 1998, without having been able to profit from his invention.

Google doodle on Wednesday honours to Czech chemist Otto Wichterle, who is known to have invented the modern soft contact lens. Now used by millions of people an estimated 140 million people around the world for their eyesight needs. today in October 27, 2021 google doodle celebrate Otto Wichterle 108th birthday anniversary.