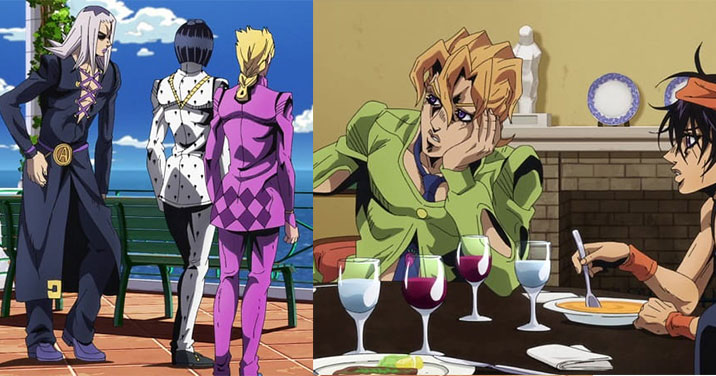 Fans are storming social networks and search engines in search of information about their favorite project.

Everyone, without exception, wants to know when the 6th part of the anime about JoJo’s incredible adventures will be released. We have found out the most relevant information for you and are ready to share it.

The Consequences of Kindness

The anime about JoJo is based on the manga of the same name, which was released by Hirohiko Araki. When creating the animated series, the organizers decided that they would follow the original almost literally.

The participants in the process have repeatedly admitted that it was not easy to film the manga, because literally every page of the work had to be transferred to the screen and at the same time the overall dynamics had to be preserved.

Of course, all transfers were subject to requirements – some scenes were censored . Basically, these are scenes of violence, which are enough in the project.

Events began in England at the end of the 19th century, where the aristocrat JoJo takes care of an orphaned guy, wanting to raise him like his own son.

The real son of the protagonist is not happy with his brother. One day, the former orphan finds a stone mask in the house and accidentally releases terrible forces.

Now several generations of the family will fight with evil spirits and try to return everything to its place .

These were the events of the previous parts, but Netflix has already announced the 6th season of the anime “JoJo’s Bizarre Adventure”, the release date of which should be expected in December 2021. Information about the plot of the tape has also appeared – we will talk about this a little later.

Together with the announcement of the day of the premiere of Netflix, they also shared a trailer.It became known that the new chapter was named “Stone Ocean”… After watching the video, viewers noted that with each new season, JoJo looks more strange, although someone liked the new picture.

Now we know the release date of the new episodes of the 6th season of the incredible anime about JoJo’s adventures in the Stone Ocean prison, which means it’s time to go through the plot. Events will take us to Florida.

The year is 2011 on the calendar. Jotaro’s daughter is accused of killing a pedestrian whom she hit on the road and for this she faces imprisonment. The difficulty is that at the time of the tragedy it was not she who was driving the car, but her boyfriend.

In the hopes of getting some relief, JoJo pleads guilty, but gets a maximum of 15 years in the Stone Ocean prison. We will find out more details after the release date of the tape.Fans are confident that this will be an exciting and one of the brightest seasons.so don’t miss the premiere.

Of course, JoJo’s incredible adventures will continue in Stone Ocean, and after the release date of Season 6, you will see for yourself. If we follow the plot of the manga, we have to watch the heroine’s attempt to escape from a terrible prison .