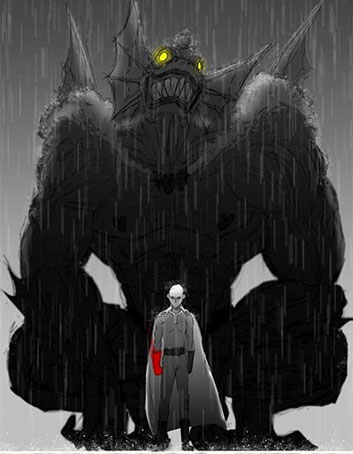 One punch man webcomic: Now is the time when weird people will appear inexplicably, and people are all looking forward to the arrival of heroes to save the common people.

At this time, he appeared! With a bald head, no matter what kind of vicious weirdo he encounters, he can kill with one punch.

The one-shot Superman Saitama who has never fully exerted his strength, what kind of secret is hidden behind his strength?

Is there anything that can make him scream? The legendary characters in the web comics industry and the outstanding painters will bring you the most powerful hero legend that has never been burnt at room temperature!

What is One Punch Man ?

One Punch Man , the hero of the revolutionary setting, is the strongest hero Saitama who can defeat all enemies (monsters) with a single punch.

In shōnen manga, the royal road is that the main character suffers and grows to beat a strong enemy, and if he wins, the next stronger enemy comes out. Without such a thing, it is the strongest by default. It’s too strong to be a manga. normally. (Lol)

This strongest hero Saitama is the strongest hero with no enemies, One Punch Man! Even if an enemy monster appears, it will be defeated with one punch.

With such a setting, it’s not interesting to continue talking!

It looks like it will be, but it’s interesting!

… I’m sorry for the drawing power!

Without losing such drawing power, the development that keeps laughing at the hints stretched around the magnificent story development. And a sudden quote!

The original drawing power is honestly terrible, but the author ONE who makes it attractive is amazing. In fact, without that touch, one of One Punch Man’s charms, weakness and swayingness, would not be possible.

In the next chapter, we will introduce the original and contrasting remakes.

“One Punch Man” is a hot topic because the second season of anime was broadcast from April 2019, but did you know that the original is a manga that is still published on the WEB? (one punch man webcomic)

In this article, I will explain the differences between the original ONE version and the remake version of “One Punch Man” by Yusuke Murata. The original work by ONE, which had been suspended for a long time, was updated in June 2019, so keep an eye on “One Punch Man“, which will become even more exciting.

“One Punch Man” is a web comic that depicts the exhilarating story of Saitama, the hero who is a hobby, defeating any enemy with a single blow (One Punch).

The original is still serialized on the WEB, and a remake version is serialized in “My Neighbors Young Jump”.

The author of the remake version is Yusuke Murata, a manga artist who is also famous for his works such as ” Eyeshield 21 “.

Both the original and the remake version are the same manga work, but I will thoroughly explain what is different between the two.

Difference between original and remake

The original is a picture drawn by Mr. ONE, but it is very interesting. However, it is a pity that the drawing power is not good.

I would like to say that the unfortunate picture is also the charm of the original One Punch Man. Innovative settings and stories that have never been seen, and unique characters.

Since the groundwork is firmly formed, the image with a feeling of weakness comes to life as a unique style.

When this One Punch Man original was remade, I was amazed. The drawing after the remake is Mr. Yusuke Murata of Eyeshield 21. It is a wonderful work with the highest level of drawing power in Japan and the attractive world view of the original.

The original work of One Punch Man is a manga released for free on the Web. If you think it looks interesting, you have to read it! Please fully enjoy the charm of Mr. ONE’s One Punch Man!

Read the remake version of One Punch Man (Yusuke Murata)

The remake version of One Punch Man is also partly released for free at the neighboring Young Jump . Why don’t you enjoy reading and comparing with the original? One Punch Man evolved by the hands of top professional manga artist Yusuke Murata, you will be amazed!

Compare “One Punch Man” ONE original and Murata remake version! What’s the difference?

The ONE version and the Murata remake version have almost the same content until the identity of King is discovered, but after that, the story and characters appearing will differ .

We will thoroughly compare the three differences of drawing power, story, and characters.

The biggest difference you can see first is the drawing power.

ONE-sensei’s paintings are not very good as a manga artist.

However, not only simple patterns, but also character designs and manga productions are often drawn in, which seems to be the reason why they have gained so much popularity.

On the other hand, Mr. Murata has an overwhelming drawing power that is well known .

Handsome and cute female characters are drawn more cool and cute in the remake version.

The battle with monsters is also powerful and easier to read.

The book “One Punch Man” currently on sale is a remake version.

The cover page is also talked about as being cool every time a new volume is released .

The story is almost the same until King’s identity is discovered.

After that, there are many minor changes in the story, but roughly there are three major differences between the original and the remake version: “Phantom Association Attack”, “Super Fight”, and “Gallow and Child Encounter” .

In addition, the remake version has more places to show Fubuki, Genos, metal bats, and other heroes.

Human attacks by these monsters will proceed in parallel with the Super Fight edition.

The battle with the giant monster, Elder Centipede, in which the scene of the crushing by Saitama is drawn over 8 pages, is also a remake version only.

However, since the name of the story different from the original such as this monster attack edition and super fight edition is produced by ONE teacher, it is not an original modification of Mr. Murata.

The Super Fight edition, which features many characters not found in the original, such as Suiryu and Goketsu, is also a remake version only story .

Super Fight is a tournament-style tournament where fighters decide the number one, and Saitama has decided to participate in this tournament to fight fighters because “hero hunting” is a fighter.

And Saitama pretends to be Silverfang’s disciple Charanco and participates in this Super Fight.

This Super Fight edition is a very refreshing story in which Saitama’s strongest is drawn thoroughly.

In the original, the encounter is a scene where a child is being bullied, but in the remake version, Gallow calls out to the child who is looking at the hero pictorial book in the park .

However, since this child will be a character who plays an important role in the Gallow edition, it can be said that the change in the encounter scene is a big change.

Since this name is drawn by ONE teacher, I think it was intended to reinforce the friendship and friendship between Gallow and the child, which is not often drawn in the original, with a remake version.

There are many characters that appear only in the remake version, which is also a big difference .

Suiryu is a fighter character that appears in the Super Fight edition .

Although he has won numerous competitions, he does not practice much and has the idea of ​​wanting to live comfortably, showing his overwhelming strength even in this Super Fight.

Waganma is the son of Narinki, the chief adviser of the Hero Society .

In the remake version, you will be kidnapped by the Phantom Association with a ugly child (Taleo).

The actions taken by Narinki, whose son was kidnapped and upset, put the Hero Association in a pinch.

Phantom King Orochi is the strongest boss of the Phantom Association that appears only in the remake version .

The scene in which the Phantom King Orochi fights against the hero camp has not yet been depicted in the remake version, but it is expected to be depicted in the future.

Gyoro Gyoro is a character positioned like a brain of the Phantom Association .

Since the battle scene with Tatsumaki is almost the same development, isn’t it the original Psychos? It is said that.

How often are the “One Punch Man” ONE original and Murata remake versions updated?

The original “One Punch Man” was not updated for two years until the beginning of this year, but after that, it is updated at a pace of several months.

The remake version is still updated at a pace of about one episode every one to two weeks.