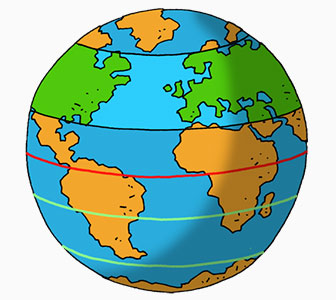 So What is Latitude ?

Latitude refers to the linear angle formed by the line between a point and the center of the earth’s sphere and the earth’s equatorial plane, and its value is between 0 and 90 degrees.

In English text, latitude is usually represented by the lowercase Greek letter phi (φ). It is measured in degrees, minutes, seconds, or decimal degrees, with N or S attached to indicate north latitude or south latitude. Same latitude The connecting line forms a great circle parallel to the equator.

Latitude values ​​are between 30 and 60 referred to in the area between the degree of latitude regions; latitude value region between 60 to 90 degrees is referred to as high -latitude areas defined by the. latitude when done abstract assumed that the first two, in order to geoid.

Instead of the physical surface of the earth, the geoid is an imaginary closed surface formed by the static and balanced sea level on the earth extending into the interior of the land.

On the map and the globe , we can see thin lines, horizontal and vertical, very similar to squares on a chessboard. These are the lines of longitude and latitude. According to these latitude and longitude lines , the position and direction of any place on the ground can be accurately determined.

How are these latitude and longitude lines determined? The earth is constantly rotating around its axis (the axis is an imaginary line passing through the north and south poles of the earth and the center of the earth).

Draw a large circle perpendicular to the axis of the earth in the middle of the earth so that every point on the circle is the distance between the north and south poles Equal, this circle is called ” equator “. On the north and south sides of the equator, draw many circles parallel to the equator, called “latitude circles“; the line segments that make up these circles are called latitude lines.

It is defined as the angle between the line from a point on the earth to the center of the sphere and the equatorial plane. We define the equator as zero degrees of LT, and 90 degrees from the south to the north.

Secondly, from the North Pole to the South Pole, many large circles in the north-south direction perpendicular to the earth’s equator can be drawn, which are called “warp circles“; the line segments that make up these circles are called meridians.

In 1884 AD, it was stipulated internationally that the longitude line passing through the Greenwich Observatory in the suburbs of London, England was used as the starting point for calculating the longitude , that is, the longitude is zero degrees, zero minutes and zero seconds, also known as the ” primary meridian .”

The 180-degree line of longitude has been established by various countries as the “ international date change line “. In order to avoid using two different dates in the same area, the international date line deviates slightly when it encounters land.

what is the latitude and longitude of Beijing ?

We can easily find out from the map that it is 116 degrees 24 minutes east longitude and 39 degrees 54 minutes north latitude. For ships sailing in the sea, as long as the longitude of the location is measured, the ship’s position and direction in the ocean can be determined.

There is a total of 90 degrees of LT. The equator is 0 degrees and is arranged at the poles. The smaller the circle, the greater the degree.

The lines longitude projected on map appear to be curved & vertical lines but are actually half of the great circle.

The lines of LT are projected on the map as seemingly horizontal parallel lines, but they are actually circles of different radii.all locations with same specific LT are on same LT.

The equator has a LT of 0°, dividing the planet into the southern and northern hemispheres.

The total length of the earth’s meridian is about 40008km.

How can we remember the longitude and latitude in geography?

All meridians are a semicircle, that is, half of the great circle of the earth, and have the same length. We define the meridian passing through the Greenwich Observatory in London, England as the 0° meridian, and divide the east and west sides into the east longitude and the west longitude until the 180° meridian.

The line of LT refers to the trajectory formed by a point on the earth’s surface following the rotation. The equator is the longest line of LT, which is defined as the 0° latitude. The north and south sides are divided into south and north latitudes, up to the north and south points.

The Arctic Circle passes through northern Europe, northern Russia, Alaska in North America, and northern Canada. Then observe the longitude, Europe and Africa basically coincide in longitude, from 0° longitude to about 60°, and the two continents are bounded by about 35°N.

North and South America is located in the western hemisphere, from 40°W west to 80°W, mainly South America; and 80°W west to 120° is the main part of North America. In addition, there are some important cities that can be used as positioning points for remembering LT and longitude.

The location of Hangzhou in my country is approximately (30°N, 120°E). Of course, in the modern era when mobile phones and other tools are developed, the memory of LT and longitude is mainly a kind of thinking training, and in practice we can completely open the electronic map in the mobile phone.

Also read : What Does OTP mean or What is OTP Code ?